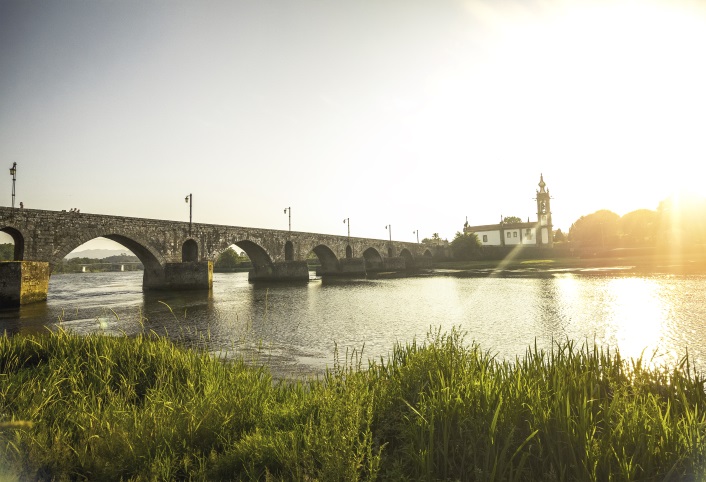 The main symbol of Ponte de Lima, that together with the river names the town, is its bridge.

In reality, it’s a composite formed by two bridges: a medieval part, which is bigger, starting on the left bank of the river and stretching to the church of Santo António da Torre Velha and beyond, for the length of two more arches.
After that, starts the roman part of the bridge. It is only five arches long, starting from the big arch already lying on the old, dry riverbed. Going down the stairs, one will also see the foundation of the Old Tower, maybe the first of the old medieval defensive system. The Roman bridge, presumably, dates back to the 1st century since that is the age that witnessed the opening of one of the Roman military ways of the “Conventus Bracaraugustanus”, connecting Braga to Astorga, more exactly the Via XIX, opened by Emperor Augustus.

Regarding the medieval part of the bridge, although one can go back in time, at least until the reigns of Pedro I and Fernando (that directly connect to the construction of the walls and towers that fortified the town, finished by 1370) or even King Dinis (according to the documents mentioning a bridge that could also have been made of wood) we definitely know about the existence of the medieval bridge during the reign of Manuel I, more exactly in 1504, as this monarch ordered the new paving of the bridge and its decoration with battlements that were no longer necessary as a defensive and military option.