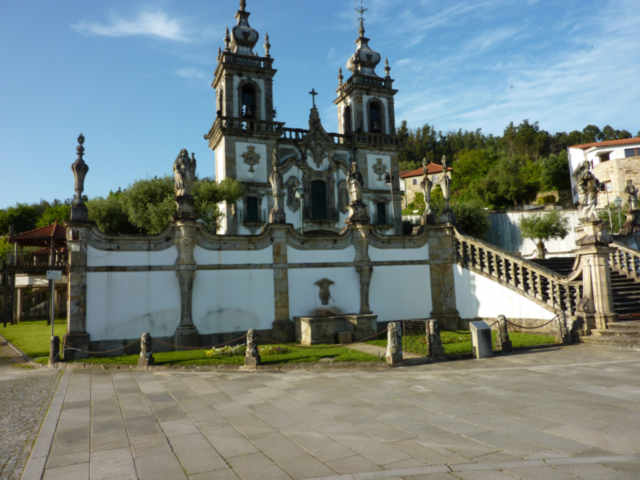 The name Labruja came from the Portuguese word laboriosa, after the name of the mountain range where it is located; laboriosa means laborious in English.
The ancient settlement dates back to the primordial history of Portugal which, although may not have existed during the Roman era, was a village during the Goth civilization.
Historically, the settlement grew from the 9th century village, that became a centre of a Benedictine monastery, founded by Hermóigio, bishop of Tui. Labruja was a vicarage of the Sé of Braga, and also, at one time, the archdeaconship of the Sé of Tui.The Benedictine monastery of São Cristóvão de Labruja, was founded by the Bishop of Tui, Hermoígio, who ordered its construction on local lands (Bandeira) under the reign of the monarch Ordoño II of León.This king later donated the monastery to the Sé in Lugo, in 915. In 1125, Teresa transferred this title to the Sé in Tui.During the division of ecclesiastical lands on 1 December 1156, the churches of Cepões, Rendufe and half of Romarigães was transferred to the administration of Tui.In 1242, Lucas, Bishop of Tui, created the archdeaconship of Labruja, with its seat in the Sé and administration at São Cristóvão de Labruja.

During the Inquirições (inventory/inqueries) of 1258, the monastery became part of the Royal Padroado. The Sanctuary of Our Lord of Help/Aid (Portuguese: Santuário do Senhor do Socorro), was the centre of religious pilgrimages during the 13th century, and was remodelled in 1773, in addition to further renovations in successive years.
Labruja was on the road to Santiago de Compostela, along the famous Saint James’s Way, crossed by the faithful.
The monastery was closed in 1460, and by 1520, the local census (written by Diogo de Sousa) identified that the monastery was reduced to merely a parochial church.
It was founded after the foral of São Martinho, bestowed by King Manuel I of Portugal on 2 June 1515. In 1546, Archbishop Manuel de Sousa, evaluated the monastery and annex in 70,000 réis. Friar Baltasar Limpo, in 1580, identified Labruja as an ecclesiastical parish, and annexed the community of São Tiago de Romarigães.